Union as a serious sport 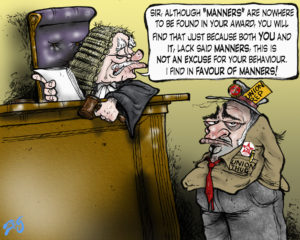 How far we have surrendered our economic and individual freedoms? Unionism has changed a lot since the late 1970s but so has the concept of choice. Both are discussed here.

A call from the union

May 2, 1979 in Kalgoorlie, started like any ordinary day. The phone at home rang at 4am. The caller said: “I know Kalgoorlie has two or three hours’ time difference on Sydney, not sure which way, so thought I would catch you before you go to lunch.”

Later at the office, two of our three girls were off sick. The remaining one, my secretary, was coping with their phone calls as well as aiding my departure to Perth.

In walked a union heavy and demanded to inspect the books. His request was relayed to me and my only comment was: “Some other time! Please pick a time mutually convenient.” Much later my secretary advised that he wouldn’t leave as: “only now is convenient.”

I met him and explained the deadlines controlling our day. I mentioned that in a civilised society it was customary to make an appointment before consuming another’s time unproductively. His suggestion was: “Why don’t you write that into the Industrial Award?”

At my suggestion that he was bouncing me he asked if I would like to “explain that to the magistrate.” Several weeks later the summons arrived and the court appearance followed.

The magistrate probably found our court confrontation entertaining, if not enlightening. I gained the impression that he would be delighted to have dismissed the union’s charge. I expect he feared an avalanche of small businessmen querying the heavy-handed demands made by unions.

They experienced difficulty in convincing me how I could be bound by an award to which I was not a signatory. Also, none of my staff were union members and did not welcome such “compulsory assistance.” Technically the union’s summons was imperfect as it quoted the incorrect date for my alleged offence.

In finding against me (and imposing a minimum fine of $15) the magistrate apologised. He said the law unfortunately did not specifically state that the union representative has to be polite and make an appointment.

A recording of my day in court can be found here.

An encouraging point was that after hearing the lengthy evidence, the magistrate obtained assurance from the union representative that in future, he would behave in a civilised fashion and make an appointment before calling. Not a momentous decision but let’s look at how far we have surrendered our economic and individual freedoms.

I find enough challenge in surviving in business these days, without union heavies crawling all over me. I have nothing against unions. If unions were voluntary organisations it would restrict them to operating in the best interests of their members. Members would desert them if they went out of bounds.

If unions can produce the results they say they can, people will join. If they demand compulsion, what are they saying about their union? Chambers of Commerce and many other professional bodies operate successfully on a voluntary basis. I’m aware that it wasn’t just me versus the unions in court. It was me versus the state laws that gave the unions the powers that can be abused.

In a court of justice I would have won but in our court of law I lost. The reason? How can you use a socialist law, to oppose socialism? More than 130 years ago French economist Frederic Bastiat, in his book The Law, explained how it is upon the law that socialism itself relies.

“And when once the law is on the side of socialism, how can it be used against socialism? Socialists desire to practice legal plunder, not illegal plunder. Socialists, like all other monopolists, desire to make the law their own weapon.”

Bastiat explained the three choice before society, as being:

A further quotation from The Law perceptively predicted how the law could be perverted and used against justice.

“The Proper Function of the Law: And, in all sincerity, can anything more than the absence of plunder be required of the law? Can the law – which necessarily requires the use of force – rationally be used for anything except protecting the rights of everyone? I defy anyone to extend it beyond this purpose without perverting it and, consequently, turning might against right. This is the most fatal and most illogical social perversion that can possibly be imagined. It must be admitted that the true solution – so long searched for in the area of social relationships – is contained in these simple words: Law is organized justice.

“Now this must be said: What justice is organized by law – that is, by force – this excludes the idea of using law (force) to organize any human activity whatever, whether it be labor, charity, agriculture, commerce, industry, education, art, or religion.

“The organising by law of any one of these would inevitably destroy the essential organisation – justice. For truly, how can we imagine force being used against the liberty of citizens without it also being used against justice, and thus acting against its proper purpose?

“This is the seductive lure of socialism. And I repeat again: These two uses of the law are in direct contradiction to each other. We must choose between them. A citizen cannot at the same time be free and not free.”

What Can We Do?

I suggest that, to wring the mess from our system, there are at least four courses of action open to individuals:

Each of us have different talents and an approach any or all of the above four alternatives, injected with logic and good humour, can be most rewarding in many ways.