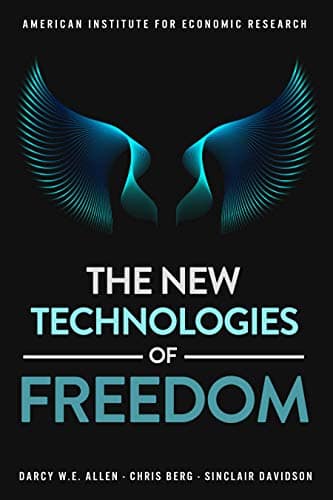 Below are comments delivered by Dr Chris Berg on September 17, 2020 at the launch of The New Technologies of Freedom at the Mannkal Economic Education Foundation.

I’m really excited for the opportunity to speak to you this evening about my new book The New Technologies of Freedom, that I co-wrote with Dr Darcy Allen and Professor Sinclair Davidson. It has now been published by the American Institute for Economic Reform.

My name is Chris Berg and I’m the co-director of the RMIT Blockchain Innovation Hub. The BIH is the world’s first social science research centre into blockchain technology. I’ve got a long background in the liberty movement in Australia and around the world.

This project is a joint project between the BIH and Mannkal Economic Education Foundation. We’re incredibly grateful for the support that Ron Manners and his team led by Andrew Pickford have given the project.

Ron has related a conversation he once had with Friedrich Hayek – and Ron please correct me I butcher your anecdote! In the midst of listening to Hayek explore his theory, Ron asked the great Hayek to “slow down because I’m not an economist”. Hayek replied to Ron:

“I’m glad you’re not an economist. We economists simply dream our ideas and think our thoughts but you go out and – fire the bullets!”

This project is just that – a way to fire bullets for liberty, not merely think or dream about liberty. Let me explain how.

The liberty movement – the network of people who support free markets and individual rights across academia, think tanks, the philanthropic sector, and the media – have largely taken two approaches to the pursuit of their shared goal.

The first is legislative change. The liberty movement opposes bad laws – laws that reduce liberty – and supports good ones. The work of the movement is focused on argument and outreach. It is about policy making and the policy process. Many of the origin stories of our biggest organisations are based on that.

The second is influence. All the legislative advocacy in the world won’t be any good if the public is actively hostile to liberty. So a big part of the liberty movement has focused on public education – explaining and debating the origins of our freedoms and why they matter.

I don’t mean to denigrate these approaches. Not at all. I’ve spent my career focused on legislative change and public education, and will continue to do so.

But this book is about a third option. Now we are not limited to simply advocating for liberty. Now we can build liberty.

Because the liberty movement has spent too much time begging the state for its liberties back.

We now have an historically unique opportunity to exploit a suite of frontier technologies to advance our individual freedom.

We are in the midst of a massive digitisation of economy and society. The next generation of technological revolutions – sometimes called industry 4.0 – present us with a chance not just to be more productive, and more engaged but in a very real sense more free.

Just think of the revolution that Uber presented public policy as it rolled out across the world, breaking down by (metaphorical) force the regulatory morass that was the taxi industry. We’re about to see that across nearly every field of regulatory control.

So these are what we call the new technologies of freedom. We’re inspired by Ithiel de Sola Pool’s classic book Technologies of Freedom, published in 1983. In that book, Pool argued that cable television and electronic publishing undermined government control of speech – made the complex regulatory systems that had built around the siloed communications networks redundant.

Indeed, just thinking of the significance of these technologies through a historical lens (I’m an historian by training) is revealing. So here’s a simple observation.

I’ve spent many years arguing for reform of Section 18C of the Racial Discrimination Act – the particular piece of legislation that the columnist Andrew Bolt was found to have violated and prohibits speech that offends, insults, humiliates and intimidates on the basis of racial, national or ethnic origin.

Obviously much, much has changed. And the results of those changes have been very good for our freedom to speak. Censorship – that is, government restrictions on the flow of information – has always been hard. Under the Soviet dictatorship dissidents passed clandestine self-published samizdat between them – that was how Aleksandr Solzhenitsyn’s One Day in the Life of Ivan Denisovich was distributed.

But if censorship has always been hard, now it is functionally impossible. We have – just on our desktop computers – a host of techniques to hide information from avoid being censored. We can use end-to-end encryption on our messages. We can use virtual private networks. We can use the Tor browser. We can use distributed networks like torrents and blockchain.

These are tools right now being used by those who live under some of the world’s most politically oppressive regimes.

Let me give you a specific example. The most significant and elaborate censorship infrastructure in world history has been established by the Chinese Communist Party with its Great Firewall of China. One of the things they are concerned to prevent discussion of is the #metoo movement in China – it will not do to have the reputation of figures of authority be harmed by accusations of sexual misconduct.

Yet thanks to the Ethereum blockchain, we can read directly from behind the Great Firewall a personal story, published in 2018, from a student at the Peking University of the steps that were taken to suppress her allegations of sexual misconduct.

This message will live in the Ethereum blockchain in perpetuity – it is functionally uncensorable, accessible everywhere there are internet browsers, and buried deep into the transaction history of this new digital economic infrastructure.

This is an easy example, because it’s so stark – speech about personal harm in an oppressive regime. But speech matters now more than ever before. Speech is not only what we speak. Algorithms are speech. Software is speech. And as the internet entrepreneur Marc Andreessen has famously said “software is eating the world”.

As the economy turns into software, so control over it turns into questions of free speech. Uncensorable speech.

One last example. Over the last decade 3D printing – the use of heated filament to make objects using digital computer files – has gotten really, really good. You can now download 3D printer design files for fully working firearms. In the United States, most firearm debate is centred around the Second Amendment, which protects the right of citizens to bear arms. But 3D printed guns make the question of gun control less about the Second Amendment and more about the First Amendment, which protects Americans’ speech rights.

Yet here in Australia, where we have no such gun rights and much more limited speech rights, it is just as trivially easy for us to find and download the design of a 3D printed gun as anywhere else in the world. With a good quality 3D printer – easily accessible for consumers – we can produce, in the comfort of our own home, a firearm that we could not purchase legally.

Maybe this example makes you uncomfortable. But it is a stark illustration of how these new technologies completely change the possibilities of free exchange and interaction. In our book we explore what these technologies mean for money, business, privacy and speech. We look at artificial intelligence – and how to handle the new challenges that poses. We look at seasteading and special economic zones.

But mostly this is a book that says that while legislative change matters, liberty is something we can build. It demands something of is. We’re asking the liberty movement to direct at least some of its attention towards building new technologies, new products, new services. We have to use this new technologies. And we have to avoid using insecure technologies.

Because the point is not just to protect ourselves – its to create a more free world. The expansion of freedom is our responsibility. We are active participants in the future of liberty.

The New Technologies of Freedom is part of a joint project between the RMIT Blockchain Innovation Hub and the Mannkal Economic Education Foundation. It is available for purchase from our Book Shop.