This article was printed in the Australian Journal of Mining in October 1992. Editor Peter Barrett prefaced it by writing the following: “Taken from an address by Ron Manners, Executive Chairman of Croesus Mining, in this year’s Croesus annual report, repeated because I wish I’d said it first!” 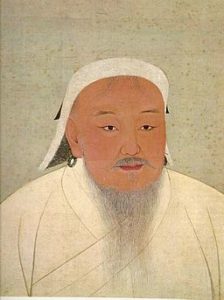 Tracing government through its history shows that only subtle changes have occurred since the days of Genghis Khan – when early ideas of expropriation started in the form of direct negotiation with victims.

Ogodei, Genghis’ third son and successor as Great Khan, quickly grasped the logistic advantages of taxation, as opposed to burning and pillaging, as a means of redistributing wealth in favor of ruling class and its faithful followers.

Today’s governments have refined the system further by legislating that employers do the dirty work of collecting taxes as unpaid servants of the political ruling class. They have unleashed a battalion vexatious taxes, many to be collected by others at their own cost.

These taxes are so complex it is almost impossible for any individual to calculate the total percentage of their income that is paid in taxes.

You say levy, I say tax

In Australia today it is possible to be paying 87 per cent of your income as tax. Economic freedom is, in part, measured by that amount left for you to spend as you choose on goods other than taxes. And with that figure being as low as 13 per cent it gives Australia a low score in the economic freedom stakes, and that is a direct result of bad government policies.

Government desperately wants your money to spend on what it terms ‘job creation programs’. Government doesn’t create real jobs — people and companies do. But only when left with enough of their own resources to enjoy some economic freedoms.

By studying other countries, the lesson to be learned is that in order for growth to continue rapidly, economic freedom must be continually expanded, not curtailed as has been the Australian experiment.

Why has this situation developed? Business leaders have over the years not always acted in the interests of the productive sector, often preferring not to rock the boat. It is their total compliance that has permitted the nonsensical and constant procession of new taxes – with his year’s new crop including training tax and superannuation tax.

A levy by any other name is still a tax. Things will only get better when captains of industry get up off their knees and refuse to collect these taxes. How much more pain needs to be inflicted on our country before the seeds of this idea take root?

If governments (state and federal) insist on these taxes, they should at least be prepared to do their own dirty work of collecting, or paying those who collect for them. If governments had to collect their own taxes, levels would reduce, as they would be brought face-to-face with angry taxpayers.

The price is (not) right

If this price is too high, there is less innovation and success. If this price is lowered, there will be more. Kalgoorlie sees a constant stream of job seekers fleeing from the rust-best states. Kalgoorlie knows firsthand the growing frustration and anger within the productive workforce at the ever diminishing prospects in this country, confronting those who wish to produce and achieve.

The way to end the recession is to reverse the many policy mistakes that caused it. A good start would be to call off the regulatory dogs that snap at the ankles of new and existing projects.

The bureaucratic mentality gains job satisfaction from clipping the wings of the productive sector. Bureaucratic proliferation is an example of bad public policy, and requires rapid reversal.

Taxation, over-regulation and the insane restrictions to land access and exploration for mining are the three problems that threaten our industry with extinction. It’s time to take a break from our preoccupation with technology and come out of our corner fighting, before we have nothing left to fight for.