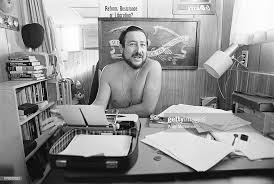 One of the events that brightened up my ‘Coronavirus Besieged Easter’ was the Reason.com release of Jesse Walker’s interview with Daniel Tucker entitled Karl Hess: From Republican Speechwriter to New Left Radical to Libertarian Homesteader.

This masterful piece documents Hess’ remarkable life and career that spanned journalism, political activism, philosophy and hands-on interests that led him to describe himself as a ‘free-marketer by occupation’.

His interest in individualism saw him drawn to the Republican Party, his writing skills enabling him to author the party’s 1960 and 1964 platforms. During this period he worked very closely with Republican Barry Goldwater during his 1964 presidential campaign against Lyndon B. Johnson.

Hess’ interest in individualism then drew him towards the New Left in which he observed an anarchist, revolutionary spirit that inspired him, even ‘ghost-writing’ pieces for the Black Panthers. Despite this, Hess was again hired by Goldwater for his 1968 campaign.

Karl Hess re-emerged as an influential activist over the span of many tumultuous events running from the 1970s right through to the eventual collapse of Communism in 1988 – 1990.

During those decades his interest in ecology and self-sufficient localism deepened, and he embraced the new technologies of computing and ‘cyberspace.’ His focus was on empowering everyday people and on being a ‘good neighbour’.

By the end of his life Hess’ political views were firmly in the territory of anarchic free-market libertarianism.

Why was I so excited about these documentaries and an opportunity to ‘exhume’ some other Karl Hess material from my extensive files?

Because it took me back to the early 1970s when I was introduced to the works of Karl Hess by a remarkable Californian attorney, Clyde R. Maxwell.

Clyde introduced me to the Barry Goldwater book, The Conscience of a Conservative which was largely the work of Karl Hess as Goldwater’s speech writer. I was so impressed with the Goldwater book that I became what may have been ‘the only Goldwaterite in Australia’.

When my children were very small I read them Hess’ book Capitalism for Kids: Growing up to be Your Own Boss. In it he introduces kids to the concept of high integrity entrepreneurship covering such topics as ‘Money and You’, ‘The Wonderful World of Work’, ‘Investing Time and Dollars’ and ‘Words of Wisdom.’ The below is an example of his wonderful writing:

I firmly believe that this book awakened in my children a belief in the unlimited and unique opportunities afforded every individual if they are willing to venture into life and take the ‘hero’s journey’ – a theme furthered in J.R.R Tolkien’s The Hobbit, and George Lucas’ cultural phenomenon Star Wars, which became their later interests. The cultural significance of The Hobbit and Star Wars was captured in Hal Colebatch’s slim volume The Return of the Heroes.

In Hess’ article What are the Specifics (of Libertarianism)? he outlines what he believes libertarianism to be, a definition that self-identified libertarian Charles A. Murray found he could not disagree with:

Libertarianism is a people’s movement and a liberation movement. It seeks the sort of open, non-coercive society in which the people, the living, free, distinct people may voluntarily associate, dis-associate, and, as they see fit, participate in the decisions affecting their lives. This means a truly free market in everything from ideas to idiosyncrasies. It means people free collectively to organize the resources of their immediate community or individualistically to organize them; it means the freedom to have a community-based and supported judiciary where wanted, none where not, or private arbitration services where that is seen as most desirable. The same with police. The same with schools, hospitals, factories, farms, laboratories, parks, and pensions. Liberty means the right to shape your own institutions. It opposes the right of those institutions to shape you simply because of accreted power or gerontological status.

Radical stuff! Sadly Hess passed away in 1994 at the age of 71, but such a free and thoughtful thinker ought not to be forgotten. In writing this, I hope to introduce more future thinkers and leaders to his remarkable work.

We invite your responses, feedback and suggestions. Please write in the comments box below.