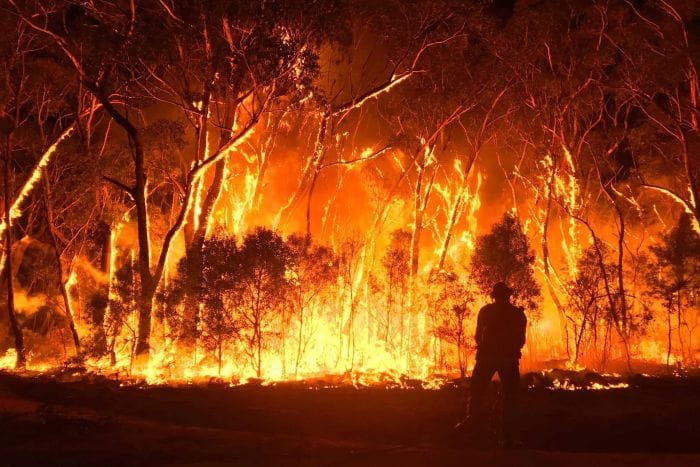 Please read carefully as we refuse to learn from even recent history:

This Mannerism from 2009 delivered a very important and topical issue. Bushfires had ripped through Victoria in a disaster now known as Black Saturday. As the event unfolded, and people began rebuilding their lives, the obvious questions were raised: where were governments in the lead up to the devastation and what would they now be doing to help?

And now the bushfires

I often wonder if history is actually being taught in our schools? Our acquiescence to our political masters’ “master plans”, for each crisis that comes along, is a case in point. I know that political leaders say: “Never let a serious crisis go to waste. That is, it’s an opportunity to do things you couldn’t do before.”

We see it with the unproven global warming crisis, and now with the so-called global financial crisis. Our political leaders have no concept of its cause but propose to plunge further generations into debt. Why? So they can pursue their political ambitions of being re-elected.

History has shown that bail-outs don’t work as effectively as well-reasoned restructuring, where the markets are permitted to do their work again. Instead, in Australia, we have a Prime Minister who tells us that by filling our ceilings with insulated pink batts it will fight back the global financial crisis. Now we have the serious Australian bushfire disaster that has captured the worldwide attention of TV viewers.

As an ex-farmer, I am familiar with the ferocity of the oil-laden leaves of our Australian bushland. Fire breaks and clearing the “fuel” of fallen leaves is important.

I’d like to throw down a challenge to our journalists and commentators. Spend a little time contemplating just who is responsible for the severity of the loss of lives and property. As each day passes, it becomes clear that the “dark green” agendas driving state and local government have robbed many unfortunate individuals of the god-given right to protect their own lives and property.

We read of Liam Sheahan, who acted wisely in clearing a firebreak around his property. He was fined $50,000, with an additional $50,000 in legal costs. He now has a criminal record but his home is the only one left standing in his community. Liam’s comment to the media was: “Commonsense is not so common these days.”

My query is when are our journalists and commentators going to take up his case and have his criminal record cleared? How about getting his legal costs refunded by his prosecutors, who history has shown to be of inferior intelligence to him, the victim?

When are our journalist and commentators going to call for the over-zealous prosecutors and framers of such penal legislation to be “named and shamed”? Let’s also name and shame those who found Liam guilty in what appeared to be a Kangaroo Court.

A long line of stories

If you think this is an isolated case then there are many more and anyone who has tried to legally protect their property via Local Government permits, will have their own stories.

Have a look at this further example of the Buxton publican Eric Notley, who, as he saw the fires approaching, leapt into a local government-owned bulldozer to clear away debris. He is now being investigated.

Further stories are here, as some of our notable commentators don’t mind promoting this rare ingredient of commonsense:

Bushfires: the lessons of history, by Peter Westmore, News Weekly