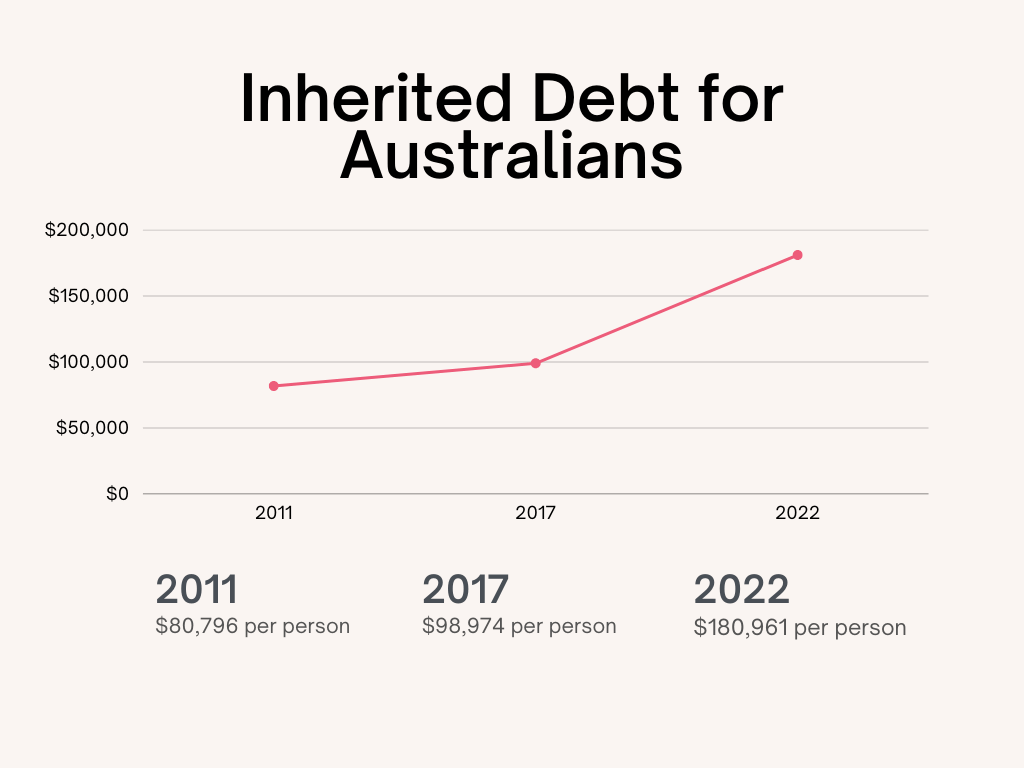 In 2012 I wrote a poem (below) expressing concern at the level of debt inherited by every newborn Australian.

Nobody seemed to care.

Am I the only one concerned?

Inherited Debt – Getting Worse!
Will They Make the Same Mistake?

I think about the young ones in generation Y
Their enthusiasm and energy,
their ability to reason why.
They can clearly see the burden
which hasn’t reached them yet,
passed down by past generations
that burden’s known as “Debt”.

Now how on earth did it get this way,
us “oldies” are not all dills.
Were some of us looking the other way
or brain dead on too many pills?
Did they fall for the same old story,
known as the “political curse” –
spending to buy the people’s votes
which, of course, makes everything worse.

“You can live at someone else’s expense”,
goes the old political song,
“Give us your vote, you lovely folk
and you’ll see we will do no wrong.”
“We are handing out these millions
while someone else is paying.”
Remember the bandit, Robin Hood,
had a very similar saying?

If we calculate what is owing
with some really simple accounting,
you will see that the debt*, when the bill comes in,
will be huge – and – constantly mounting*.
Will some feel guilty, knowing their votes
were bought with the embezzled money
of a generation yet unborn?
The tragic result? – Not funny!

Meanwhile our Generation “Y”,
having started in a hole,
will hopefully vote in cynical vein
and so avoid selling their souls.
Having recently contacted and questioned,
a number of young ones I know,
they made me feel quite optimistic
that the future will reap what they sow.

We invite your responses, feedback and suggestions. Please write in the comments box below. If this article resonates with you, please SHARE!