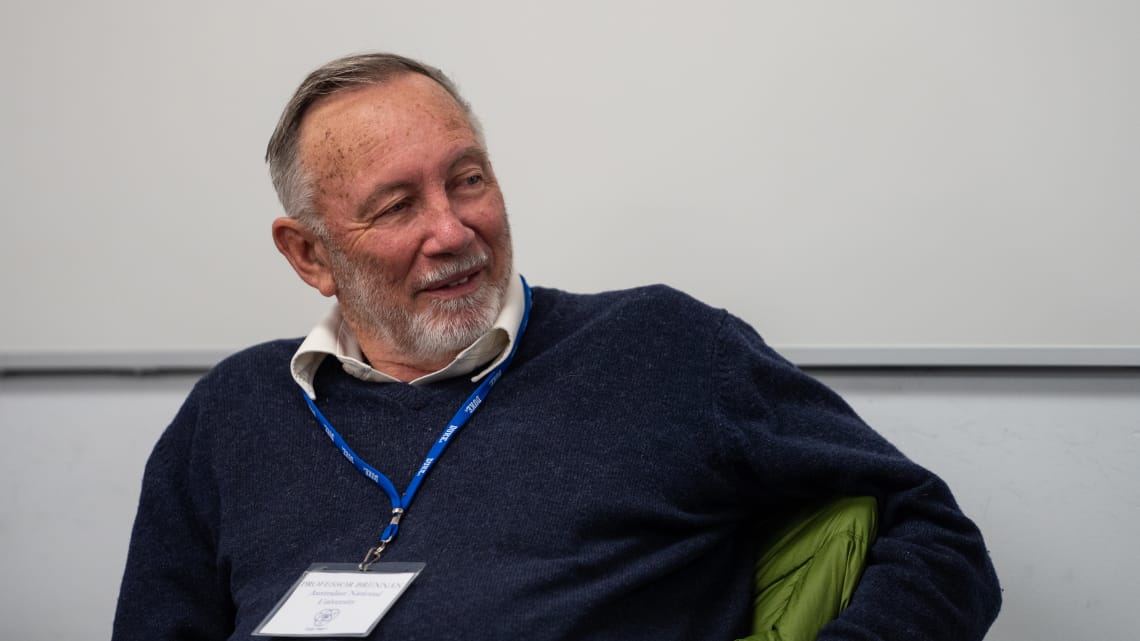 I was in Canberra recently, but unfortunately, due to what Geoff described as his “medical status” on that day, we were unable to meet for the last time.

Geoff was a Professor in the Department of Arts and Social Sciences at the Australian National University (ANU) and Research Professor in the Department of Political Science at Duke University in the US. Geoff was an eminent scholar in Public Choice, and Public Economics, and collaborated with Nobel Prize winner and Public Choice pioneer James Buchanan, becoming the first non-American president of the Public Choice Society in 2002. You can read more about Geoff’s career and contributions in this memorial article published by Duke University.

Tyler Cowen of Marginal Revolution has also written a thoughtful tribute in honour of Geoff in which he remembers that he “was popular with just about everybody.  He is also one of the few people to have worked with Buchanan and come out of the experience intact.  If he was at a conference dinner, he would be sure to find the occasion to sing a song for everybody, and he had a wonderful voice.”

In Western Australia, we highly valued Geoff’s annual contributions to the Mannkal sponsored Public Choice Theory unit and Symposium at Notre Dame University. In 2021, due to border closures, Geoff presented his work on Expressive Voting to our students via Zoom as pictured below.

Geoff’s ANU colleague Professor Keith Dowding recalls that Geoff was “well-known amongst his friends at the ANU for hosting blind wine-tasting parties.  These involved 6 red wines (always red!) usually 3 different grapes with one relatively young, one relatively old. He was also a great host for some of us at the “Milton Hilton” near the coast, a refurbished barn, where good food and wine was served along with board games, carpet bowls the like. Of course it was his idea to set up the Politics, Philosophy and Education program here at ANU, taking me out to lunch to suggest it to me.  The two of us then worked together to implement it.”

Jeff Bennett, Emeritus Professor at ANU shared the following tribute with me: “I had the privilege of being taught by Geoff as part of my PhD coursework programme at ANU. As a comparative intellectual dwarf, I was overwhelmed by the breadth and depth of Geoff’s knowledge and the power of his insights. The merging of economics and philosophy that he presented was very new to me and so was quite daunting. But Geoff’s measured and understanding presentation was nurturing and fulfilling. His respect for sometimes struggling students was outstanding. The whole course was a masterpiece, replete with the occasional musical interlude and a final exam paper presented to each student in his copperplate hand writing. The course was a metaphor for Geoff’s life and career. He was a true scholar and a gentleman, wise and kind throughout.”

Jeff’s comments reminded me of how I established contact with Geoff in 1990. James Buchanan said to me (we were in Moscow at the time) “Australia is fortunate to have an economist of Geoffrey Brennan’s calibre, you should get to know him.”

During our long friendship I have valued Geoff, not only as a complete person, but one with the rare ability to roll economics, philosophy and history together into “one great big subject”. Perhaps Geoff’s rare skill may only be matched by Deirdre McCloskey?

Meanwhile, vale Geoff Brennan, we are forever grateful for your contributions.

EDIT [August 4, 2022]
A memorial page has been set up by friends of Geoff, where people can share their recollections and post a tribute: Geoffrey Brennan