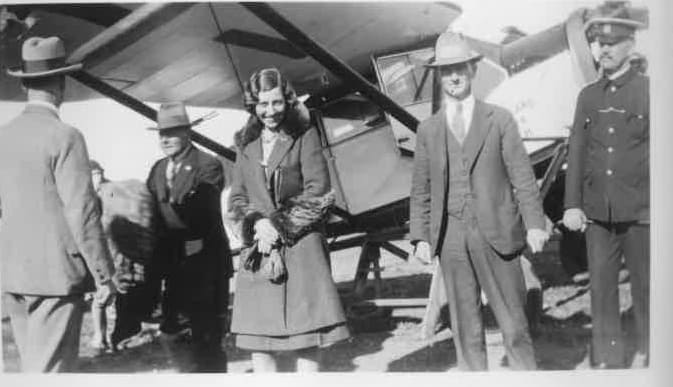 Amy Johnson, the first woman to fly solo from London to Australia, is perhaps the most famous aviatrix of all. She had a total sense of direction in her life which many men found irresistible. She enjoyed men’s company and lived in a man’s world — something rare and defiant in 1930.

This all added to her qualifications as head-turning hero material. Today, we take for granted the experience of sitting in air-conditioned luxury while we fly non-stop from Australia to Europe. In 1930 anyone suggesting it would have been regarded as either mad or a very imaginative science fiction writer.

The record books of the 1930’s filled rapidly with the extraordinary feats of great names in aviation like Amy Johnson and her husband-to-be, Jim Mollison, Bert Hinkler, Beryl Markham, Jean Batten and Amelia Earhart. This was the last great pioneering era of flight and the world made heroes out of those who succeeded.

In 1930, when she left England in a Gipsy Moth named Jason (left), she was virtually unknown. Six days later she was at Karachi and had broken the record for that flight. The press sat up and took notice. In just 19 days she was in Australia. The Daily Mail newspaper awarded her £10,000 , King George V made her a CBE, a hit tune was written for her — Amy, Wonderful Amy — and the public idolised her.

All this no doubt made it easy for Chas Manners, Kalgoorlie’s Castrol Agent, to say yes when he received an urgent telegram asking if he could spare a day to act as host to Amy Johnson. She was to visit Kalgoorlie as part of her Castrol sponsored tour of triumph.

When Kalgoorlie’s miners heard a woman coming to visit them underground, there was plenty of light-hearted banter. When Amy arrived, her conversation with one gun miner went: “How does your rockdrill work? If you strip it down I’ll show you how to make it drill faster! Amy’s practical engineering knowledge enabled her to show them that “by grinding this bit off here and some off there” they could increase the efficiency of their rockdrill.  The underground miner commented later: “Never met a woman like her before!”

Amy Johnson’s arrival on the Goldfields on July 4,1930, aroused the most remarkable scenes of enthusiasm. These extracts are from the Kalgoorlie Miner.

“Huge crowds assembled everywhere along the route to cheer themselves hoarse and “Johnnie” should long remember the typical Goldfields welcome that greeted her everywhere yesterday.

“The Boulder Town Hall was just one packed mass of humanity when Miss Johnson arrived, and the police had difficulty in forcing a passage through the crowd for her to enter the hall. Her appearance upon the stage was the signal for further wild outbursts of cheering.”

“Miss Johnson’s arrival at Kalgoorlie was eagerly awaited, and as soon as the two mounted troopers preceding the official car, came into sight, the air was again rent with cheers. The party proceeded along Hannan Street to Porter Street, turning back along Hannan Street, to Wilson Street, to the War Memorial, where Miss Johnson was met by the president (Mr WT Barnes) and officials of the Kalgoorlie sub-branch of the RSL. After depositing a wreath upon the monument, she returned to the Town Hall for the official welcome.

The Mayor, Mr B Leslie, said he was totally at a loss for words to suitably express the feelings of the citizens on this auspicious occasion to welcome Amy Johnson. (Cheers). No words could express their admiration for her feat in flying direct, without aid or assistance, from the Old Country to this sunny land.

Many wonderful feats of aviation had been performed but Miss Johnson’s surpassed all those. He called for three cheers for the visitor and these were given with a will.

The drive back to the Palace Hotel from the Town Hall was made to the accompaniment of further cheering, the whole route being lined with enthusiastic citizens, men, women and children all anxious for a glimpse of the famous Johnnie.”

“When a woman wants to make a mark in her profession, she must do something rather better than any man has ever done before,” Amy Johnson said as she left England (May 5, 1930) to try and break Bert Hinkler’s record flight to Australia.

From where did this 26-year-old daughter of a Hull (UK) merchant pluck this enormous courage? Some say that if the Swiss businessman she met at 18 and loved for several years had not married someone else, she may not have taken to the skies at all. According to The West Australian (January 6, 1988): “She did so because she thought she might be killed in the melancholy irrationality of the affair’s aftermath, she felt that this would get through to her lost lover”.

She later married a fellow flying ace who turned out to be a philandering drunk, leading into an inevitable divorce. With that background of intrigue, it was natural that her untimely death during the years of World War II would lead to intense speculation.

On January 5, 1941, Amy encountered foul weather while ferrying a much needed war-time aircraft from Preswick to London and ran out of fuel. Late in the afternoon, lookouts on HMS Hazlemere sighted a parachutist landing in the Thames estuary followed by an aircraft, engines silent, crashing into the sea.

Frantic efforts were made to save Amy. The captain, Lieutenant Commander Fletcher, dived into the sea and reached Amy, but then disappeared. A launch picked up the body of the captain but Amy was swept away and was never seen again.

A number of conspiracies

Various rumours included Amy making a secret landing to pick up a boyfriend, or flying to France for a rendezvous. Another was sparked by a seaman aboard the trawler Herne Bay. He reported that following her parachute descent into the Thames, he saw two figures in the water.

It wasn’t until 1988 that Roy Nesbit, aeronautical historian and author, pieced together the facts for Aeroplane Monthly. There was no logical reason for Amy to be over the Thames Estuary. The flight should have taken one hour and Amy had been airborne for about 4.5 hours. To cap it off, Amy was in a hurry to arrive at her destination and be at the first anniversary party of the Air Transport Auxiliary. Despite the bad weather, to not be there would have been out of character for Amy.

Roy Nesbit feels that his research proved Amy was the victim of a combination of cruel circumstances. These started with a meteorological inversion (cold air below, warmer air above). Her aircraft would have been in danger of icing up. So she did what experienced pilots do — fly higher above the cloud blanketing the countryside. Rather than diving beneath the cloud over Oxfordshire to get her bearings and risk the hills and radio masts, Nesbit insists that:

“There is absolutely no doubt that she would have turned east where she knew Hatfield, her base, lay, to fly on to the flat lands of East Anglia where it would be safer to dive beneath the clouds. Here is where Amy would have met her worst piece of luck. Documents reveal that a line of barrage balloons stretched across the seven-mile width of the Thames Estuary, tethered to small boats.

They were flying high enough to poke above the unbroken 300m cloud base. Any experienced pilot would have thought, as Amy did, they were a marker for land. When the cloud closed in, the balloons should have been reeled in but German mines dropped by plane into the water had blown up one of the boats, killing everyone aboard and the crews of the others had abandoned the vessels.”

Nesbit insists that no blame can be attached to anyone due to the confusion caused by the falling German mines. But what about the mystery of the two people seen in the water following the parachute descent? The other ‘person’ was probably Amy’s suitcase, which was recovered.

In 1999 there was a startling confession by an 83-year-old former soldier. Tom Mitchell, of Sussex, claimed that he shot down Johnson’s aircraft during a routine flight in 1941. Why? Because she failed to signal correctly that she was flying a British plane.

Mitchell, a former anti-aircraft gunner, said he was one of four soldiers ordered to shoot the plane down when Johnson gave the wrong code word over the radio. “We all thought it was an enemy plane until the next day when we read the papers and discovered it was Amy Johnson,” Mitchell said.

Mr Mitchell, who admitted a sense of guilt about the flying legend’s death, decided to end almost 60 years of silence because he felt that he could not die without offering his own version of history. An archivist with the Royal Air Force Museum in north London, Peter Elliott, said there was no way of knowing if Mr Mitchell’s claims were true.

Perhaps we will never know the truth?

From Never a Dull Moment. The full chapter can be read here.