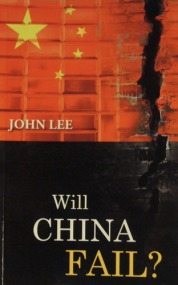 China’s rise has been a significant driver of growth for the global economy and the Australian economy depends on it. But China’s ‘economic miracle’ hides some frightening truths. China’s economy – in which the most important sectors are still contolled by the regime – is sick and failing. The regime is doing what it takes to preserve their hold on power – but at enormous cost to the country and its people.

Will China Fail? looks at the profound and mounting contradictions, tensions and dysfunctions within Chinese economy and society – including those between the regime, military and people – and why it is getting worse. It looks at why political and economic reform needed to limit the role of the authoritarian regime is likely to be inadequate; and presents compelling evidence that China is barely managing to stay half a step ahead of disaster despite its impressive growth figures. The book also looks at the emergence of the ‘new left’ in Chinese politics that is characterised by a ‘chauvinistic nationalism’ – why this is encouraged by the regime, and why it is potentially destabilising for the region.

Far from China being a ‘successful dictatorship’, Will China Fail? reaffirms the connection between limited government bound by the rule of law, and sustainable and successful transitions.

Reviews for Will China Fail?